280 Artifacts and works of art that reveal the history of the luminous Minoan culture of Crete to the metropolis of USA, New York

The interest of the American Press and hundreds of visitors daily is focused on the artifacts of the Minoan Civilization which are exhibited at the “Alexander Onassis” Foundation at the Olympic Tower in Manhattan, New York. The exhibition was co-organized by the “Alexander S. Onassis” Public Benefit Foundation in USA, the Hellenic Ministry of Culture and the Archaeological museums of Crete, with the cooperation of the Pancretan Association of America.

The exhibition presents to the Ameican public, for the first time in history, a complete picture of the first palatial civilization to flourish in Greece and the European soil during the second and third millennia B.C. 280 artifacts and works of art from the ancient land of Crete reveal the history of the luminous Minoan culture of Crete.
The exhibition was inaugurated by the Greek Minister of Culture, Mr. Michalis Liapis and the President of Onassis foundation, Mr. Antonis Papademetriou, in the attendance of hundreds of official guests from Greece and the Greek-American community, senators, members of the US parliament and dignitaries of the City of New York.

Both Mr. Liapis and Mr. Papademetriou underlined the importance of the exhibition since it’s the first time ever those artifacts travel beyond the Greek borders. The Minoan Civilization was the first palatial civilization to establish itself in European soil. Furthermore, it was the first complete palatial civilization with political and social structure, communications, and a bureaucratic structure, educational art, religious and technological aspects and sea commerce.

His Eminence Archbishop Demetrios of America stressed the fact that “Civilization is the best and unrivalled product of Greece, which creates a sense of intimacy, and has to be used to maintain the bond of the fifth generation of young Greek-Americans with motherland, Greece!”

K. MITSOTAKIS “A MILESTONE EXHIBIT”
Former Prime Minister of Greece Mr. Konstantinos Mitsotakis noted that “I am particularly happy for this exhibition. My sincere congratulations to the Onassis Foundation, the president of the Pancretan Association of America Mr. Velivasakis who contributed the utmost to this initiative and whoever worked for the preparation of the exhibit. It’s an event with great significance because these Minoan Archaeological artifacts are travelling outside Crete for first time ever. It’s a milestone. We love Crete very much and we support every undertaking to promote Crete and the Cretan civilization internationally. I am glad that I had the opportunity to come to the US again and meet with my Cretan brothers and sisters with whom I have a close bond.”

Mr. Mitsotakis also attended the reception, after the inauguration of the exhibit. The event was organized by Pancretan Association of America in collaboration with NY Cretan Chapters “Omonoia” and “Minos” the Onassis Foundation, and was hosted at the Atrium of the Olympic Tower. In his speech Mr. Mitsotakis remarked how Greece and Crete have substantially progressed over the past two decades, just as has USA which is the home of all Greek-Americans including the Cretans.

He referred to his connection with the Cretans of US for several decades now since he is the oldest one from the generation of politicians after WWII and his satisfaction with the progress of all Hellenes in US.Mr. Mitsotakis speech to hundreds of Greek Americans and more specifically to the Cretans of NY underlined the importance of this exhibit promoting Greece and even more so, Crete.

The Minoan Civilization was the first in the Eastern Mediterranean basin. He also referred to the value of the Greek Americans for Greece and especially he praised the Cretans for focusing in preserving the Cretan Culture and transmitting it to the new generations and how this is precious and valuable national collateral. In addition, he referred to the local issues that need resolution in Crete today, starting from the preservation of the Natural Habitat. Enormous efforts are taking place to restore the forests of the mountains and the natural water resources that have been dramatically reduced. Maintain and enhance the highway system and tentatively preserve the natural flora and fauna of Crete, intact. He made an analogy of Crete as being the Florida of Europe since is such a popular touristic destination and therefore regional planning all over Crete is essential. Gen Secretary Serafim Tsokas “The Cretans from the ancient years were outward-loo king!”

The Gen. Secretary of the Region of Crete Mr. Serafim Tsokas characterized the exhibition as being rather significant and important, in his statement at the KPHTH magazine: “I believe that this is an ideal opportunity to present the glory of the Cretan civilization and familiarize the American public with the ancient Cretan history and civilization in addition to the Modern Crete. Nowadays people are interested to discover their roots, and the roots of the European civilization are in Crete.
From ancient years Cretans were outward- looking. Today Crete counts a great amount of the islands’ income on tourism. Exhibits like this one are the best advertisement and representation for the island. I believe that works of Greek civilization should travel continuously all around the world. Imagine how effective and useful would have been an exhibition of artifacts from Macedonia in New York, where it could defacto authenticate and manifest Macedonia’s Hellenic roots.”

After the exhibition a reception followed at the atrium of the Olympic Tower under the auspices of PAA with wines from Crete that the Crete Region offered. This was another initiative of Mr. Tsokas in collaboration with PAA to promote and acquaint the public with different Cretan varieties of wines. Mr. Tsokas stated that the region is supporting the development of qualitative products aiming to export them to international markets opening new horizons for the distribution of the Cretan products and promoting Crete as an elite tourist destination and a fertile place for investments.

He highlighted the nutritious Cretan diet in combination with the Cretan wine will be the way for the revival of local economic activity. Referring to Cretan wine he underlined the fact that grapes have been cultivated in the island for 4000 years and that the most ancient “patitiri” (wine press) exists in the island for 3500 years. The contemporary wine makers of Crete have exploited the traditional varieties of grapes and have expanded their knowledge with the new advancements of technology to create new varieties and experiment – enhance aromas and tastes to offer unique wines that can satisfy even the most difficult consumer.

During his stay in New York Mr. L. Avgenakis , member of Greek Parliament representing “New Democracy” of municipality of Heraklion, had meetings with Ms. Balta, General Consul of Greece in New York, and Dr. Dalia, Consultant of economics and commercial affairs of General Consulate. During their meeting which was attended by Mr. Velivasakis President of PAA, was discussed in detail the need to organize small business missions` with Cretan entrepreneurs that wish for their products to enter the American market. Mr. Avgenakis stated that he will inform the Chamber of Commerce and Industry of Heraklion to start preparing for this initiative. Emanuel Velivasakis “Crete ino vates in cult ural diplomacy.”

The satisfaction and pride of Cretan- Americans demonstrated with his statements the president of Pancretan Association of America Mr. Emmanuel Velivasakis.
“The Region of Crete with the initiatives that has taken in the past three years in collaboration with PAA for the projection of Cretan diet and wine in Washington DC, Philadelphia and the metropolitan New York broadens the prospects for the promotion of Cretan products and services in United States.

The exhibition at “Alexander Onassis” foundation is the utmost action of cultural diplomacy”, underlined Mr. Velivasakis. “It is a unique opportunity, not only for the American public but especially the younger generations of Greek Americans to get introduced to the majesty of the brilliant Minoan Civilization, which is the foundation of the European one. On one hand it has an educational value and on the other hand it helps promote Crete with the most dynamic and effective manner. We are going to continue our collaboration with the Region of Crete for further promotion of our products and of Crete as an excellent touristic destination”.

The Onassis Cultural Center is located at Olympic Tower (645 Fifth Avenue, New York – entrance from the 51st and 52nd Street). 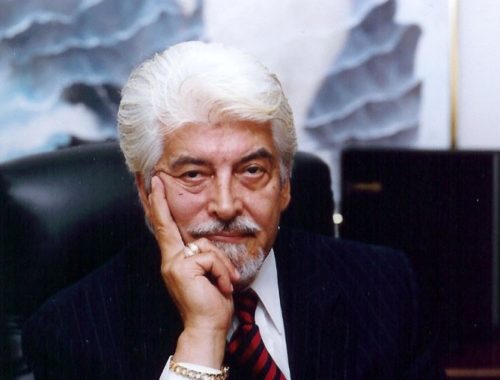